A CRAZY IDEA WAS BORN: THE MAKING OF BUS BREWED BEER

Phil himself thinks he must be one of the craziest people around to brew his own beer on a bus while travelling. His trusted fermenter is over 25 years old, but it still works like a charm. According to Phil, the most important thing you can do to maintain it is to keep it clean.

As Phil was packing up to set off on his bus conversion adventures, he saw his fermenter standing there and thought, “Why not? Let’s give it a go!” If you love a cold beer on a hot day, brewing your own yeasty is both a cost-saver and an exciting hobby. So are you ready to learn how Phil does it?

HOW TO BREW BEER ON THE ROAD

Times have changed since the fermenter first was put to action. For example, nowadays, we use reusable plastic bottles and reusable caps. 25 years ago, it was glass bottles that were all the rage in the beer brewing world.

Another neat innovation is the use of simple brewing kits. The kits are easy to get a hold of, and the instructions are straightforward and clear. You’ve got all that you need in the set, though Phil recommends using a brew enhancer. The enhancers give better results, compared to just using plain sugar. The instructions may vary according to specific brands of kits, but Phil explains the general recommendations as follows:

One of the most important things to do while waiting (im)patiently for your brew is making sure that the temperature is right. This can be a big challenge during hot summers. To keep his fermenter cold, Phil puts his equipment in a tub with cold water flowing around it and a blanket over it. He checks the temperature with a thermometer.

The fermenter should be about 21-28 degrees on the outside, as the outside temperature tends to match the inside temperature. If the beer gets too hot, it’ll leave a strange taste. For example, Phil once created a brew that tasted like bubblegum!

You’ll hear a big list of do’s and don’ts when you’re researching how to brew beer. Phil has set out to prove that you can actually make pretty decent beer while breaking some of the rules—such as the “rule” of not moving the fermenter. His fermenter has moved across states while hard at work making beer!

His best effort of brewing beer while travelling, he named the Three State Batch. Phil set in brewing in Western Australia, and it was bubbling nicely as he drove over the Nullarbor. He then bottled it in South Australia, before drinking it in Victoria. Even though it wasn’t the best beer he’d ever tasted, it came out alright! (Not bad for a beer that was brewed while crossing three states of Australia, I reckon!)

Another thing to keep in mind is that as long as you brew it right and measure up the sugar right, your beer won’t explode. Many people claim it’ll go KAPOOF, but it’s never happened to Phil (yet anyway!) — just follow the instructions, and you’ll be fine.

HOW TO MAKE BUS BREW BEER: THE BOTTLING PROCESS

o find when the timing is right for bottling, you’ve got to check the specific gravity with a hydrometer. When the hydrometer stays around 1012 for a few days, then it’s time to get your brew into bottles. His brew normally equals around 4.5% alcohol. And don’t forget that a very important part of the bottling process to sterilise both the bottles and other equipment to avoid nasty bacterias.

Phil keeps stock of around 70 bottles and does about 30 bottles at a time. He makes sure he runs the batches so that when one is finished, the other one is ready. The beer will taste pretty raw after 2-3 weeks and half-decent after 3-4 weeks. Although it might never taste as good as bought beer, if you ever try to brew beer in a bus or van, you’ll get to have some fun, experiment with different flavours and processes, and enjoy some cheap, drinkable beer on the road.

Are you now inspired to try brewing beer on your bus or van? Let us know in the comments!

Van tour of a Mercedes Sprinter that includes a bath, flush toilet, surfboard table and a coconut! (Among other interesting things!). See how Bob lives van life Australia! 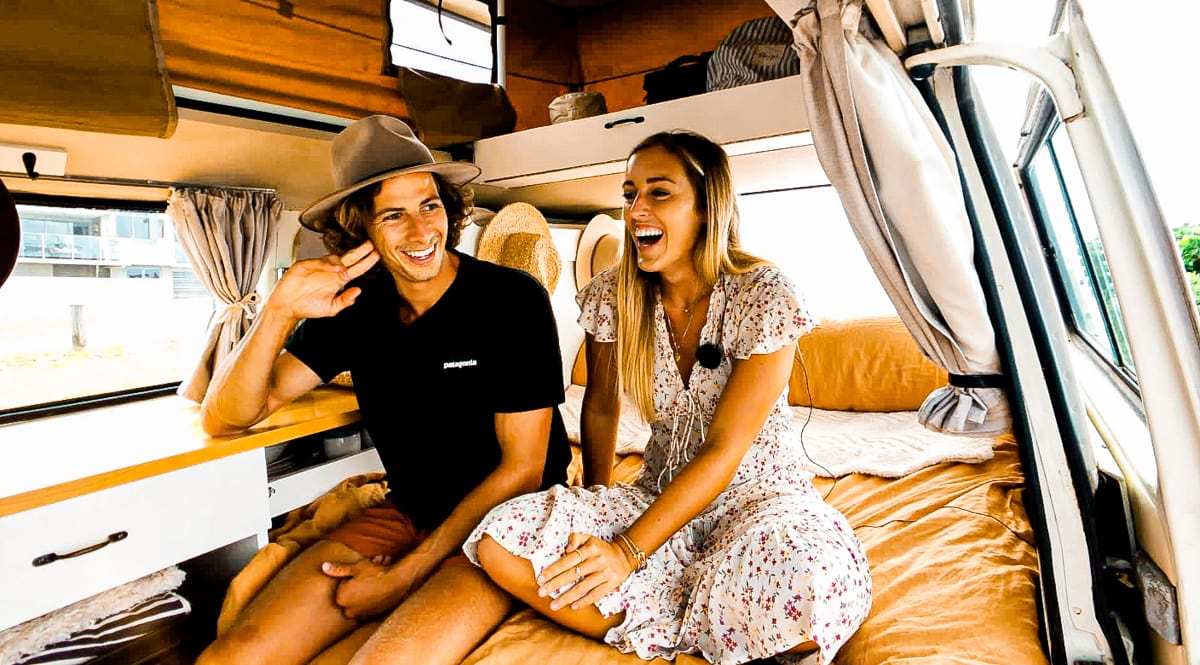 A box truck camper tour made by an artist living vanlife Australia. The self conversion was done with a lot of recycled and repurposed materials to give an authentic gypsy feel.

An immaculate Mercedes Sprinter van conversion with a bed lift (motorised). Come and get the tour with Cam and Em of their awesome conversion!

Say G'day to Jack, Chelsea and their van General T

Small features that Dan and & Madeleine built in,

Merry Christmas from the team at @NomadsAroundauat

John reckons that waking up with the sun, staying

Inspired by the Great Ocean Road 🌊 Jess and And