Are you looking for a superb DIY campervan slide-out kitchen to cook up your vanlife banquet? Then look no further. Today we are taking a tour of Lucy the 1994 Toyota Hiace campervan. What’s unique about her is that she’s got a slide-out kitchen that’ll let you whip out fantastic meals while on the road. Let’s have a look at exactly how Pepa created a slide-out van kitchen and how you can do it too.

Pepa is from the Czech Republic, and he’s been a full-time vanlifer now for almost six months. He’s got a background in mechanical engineering. His van is pretty old, but really neatly done. It uses about 11-13 litres of petrol per hour, depending on if he’s driving in the city or down the highway. The name of the Toyota Hiace campervan is Lucy, but don’t ask him why—the name just came to him.

Name of the Van: Lucy

One life, van life. No rules, No plans, No regrets.

Pepa’s built a DIY campervan slide-out kitchen that’s really neat. The kitchen has slide out shelves under the benchtop that holds his pans, grill, a stove, cutlery, and even a sink. The sink is used mostly for storage, but it does come in handy when cooking too! He used planks from pallets and different material that’s glued to the bench to create a cheap but efficient DIY slide out kitchen. Magnets hold the cupboard doors firmly in place. He’s also got some drawers for storage in the kitchen bench, along with lighting in the roof. His cups hang from the roof on hooks, and there’s a magnetic knife holder that keeps his knife set that he bought for two dollars from a vanlifer leaving Australia. A great tip to save money when making a van conversion is to always keep an eye out for second hand van equipment.

Pepa plugs fairy lights into a USB port to create a beautiful, bright feel, using resistors to decrease the voltage. The resistors can also be used as a dimmer to create an intimate atmosphere in the evenings. His battery runs his fridge, lights, and accessories such as a speaker and a mobile phone. Pepa has a 188W solar panel and a 100AH dual battery system. When he’s parked under the sun, he can use his solar panels. When the van’s parked in areas with shade, he can also use the engine to charge the battery. Pepa has a 20-litre canister of water that usually lasts him about five days, and that includes the water he uses for cooking!

Pepa is very resourceful and has an eye for smart solutions. In addition to the DIY campervan slide out kitchen, he’s also made a handy pull out bed for his Toyota Hiace campervan. First, he cut the pull out bed in half. When he’s ready to call it a day, he places a wooden board between the sofa and the wardrobe.

Then the second part of the bed (that he uses as a backrest for the sofa during daytime) is placed on top of that board. And voila, he’s got himself a big comfy bed! During the daytime, when the bed is folded, it is held firmly in place by using a metal clip he designed himself at work. He’s also hand crafted and painted a gorgeous kitchen backsplash, adding a personal and exciting feel to the interior. Another great touch is that the wardrobe door can be pulled down and transformed into a dining table.

A COUPLE OF QUESTIONS

Are you good with electricity?

Not really, but this is only DC (direct current), so it can’t kill me. Naw, I do have some knowledge. I also asked my friend to be sure. And then I’ll try it, and it works!

What do you have up on the wall?

The nets on the roof are very handy for putting away clothes, especially after doing the laundry and if the clothes are a bit wet.

An immaculate Mercedes Sprinter van conversion with a bed lift (motorised). Come and get the tour with Cam and Em of their awesome conversion!

How to make Bus Brew Beer?

Phil thinks he must be of the craziest people around to brew his own beer on a bus while travelling. But brewing your both is both a cost-saver and an exciting hobby 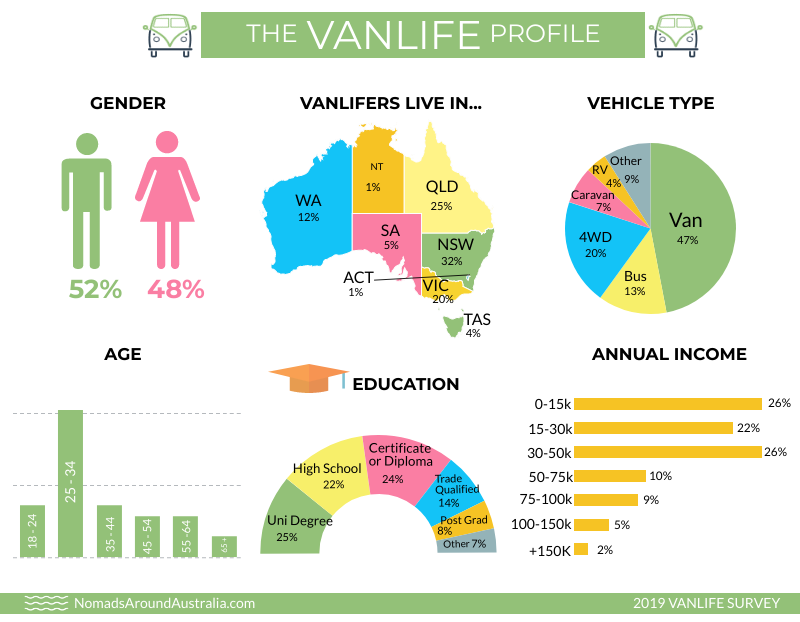 The Van and Bus Life Survey by Nomads Around Australia is the largest study of nomadic living trends in Australia.  This year’s survey received excellent support from our van and bus life community and we are very thankful for everyone who completed the survey. In total over 732 van, bus, car, caravan, truck, and boat … END_OF_DOCUMENT_TOKEN_TO_BE_REPLACED

As Lana lives by herself in her Ford Econovan campervan, she keeps the luggage and everything she needs in front of the passenger seats.

Are you looking for a superb DIY campervan slide out kitchen? Then Pepa and his 1994 Toyota Hiace is a must see!

***TIP: Build a motorised lift up bed in your van

Come and meet Cam and Em, the owners' of an immacu

Benzson is the complete campervan with a motorised

Wondering how much vanlifers spend? Here's some #

We have a new camera assistant! Everyone please sa

Set your own beer brewing in one city, bottle it i

"Do what it is that makes you excited"- Christian