Living life and getting out in nature – that’s what it’s all about for Chris who’s living right out of his beach style van. Let’s meet the dedicated driver of Vanessa the Kia Pregio campervan and see how he’s rocking the free, simple life while building his holistic health business.

LIVING IN A VAN WHILE BUILDING HIS HEALTH BUSINESS

Chris has been living all over the place. Now he’s living between Coolangatta and Broadbeach in his immaculately decked out beach style van. He does part-time, casual work for a doctor’s service, as well as being a practising acupressurist. Natural health is important for Chris. He’s started seeing clients and building up his business while doing a Bachelor of Health Science in naturopathy – all while living the camper van life full-time! Go follow Connections with Chris on Facebook to make sure you are all caught up about natural, holistic health!

ROCKING THE FREEDOM OF THE CAMPER VAN LIFE

Minimalistic living and downsizing were important to Chris when designing his Kia Pregio campervan conversion. He spent five months planning and designing Vanessa, and the beach style van turned out to be the love of his life. And after getting a royal tour of her, it is easy to see why Vanessa and the camper van life won his heart! Now he’s been living in the van for almost two years, and he’s got no intention of giving her up any time soon.

Name of the Van: Vanessa

Do what it is that makes you excited!

The 75-litre Evakool fridge/freezer is the focal point of the van, and everything else is carefully arranged around it. He had his last Evakool fridge for 12 years, and never missed a beat. Naturally, his Kia Pregio campervan had to have one too. The refrigerator has cushions on top, so it also serves a seat. Next to it, we have a bench with a foldable table. It’s easy for Chris to whip out his PC and do some work, thanks to a unique foldable desk space that can be neatly tucked away afterwards to save some space.

The cabinets have bookshelves and space for storage underneath. Along one side we have cupboards with sliding doors, and a foldable bed goes on the other side. The mattress also serves as a lounge, and it can be transformed into a double bed in no time.

The Kia Pregio luxury campervan has some really neat 280W solar panels on the roof. It goes straight from the solar controller into a 190AH power battery. He’s also got a couple of 12-volt USB ports to recharge his things.

The bench has a 15 litre water container with an electric pump. The water goes through a filter before coming up to a spout on the counter. Next to it, there’s two holes for drinking glasses. An absolutely cracking idea, the glasses can be sunk down into the holes in the bench so they don’t fall all over the place while driving.

A COUPLE OF QUESTIONS

Where did you get the lights from?

The lights run off AA batteries and come from Camping World. You just push them on and off, and they have a remote with a dimmer.

How do you cool down your van?

I have a fan up in the back in the vent. It has a dimmer switch too, but it makes a weird sound. I have a little 12 volt fan that’s super quiet. When it’s on it creates a short corridor and blows air straight down the van. It was a complete game changer; I was sweating so bad the first summer! It’s just a simple desk fan that you can get anywhere. 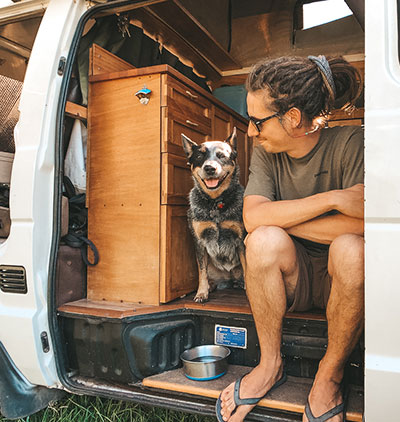 Within one week of finishing his rental lease, John bought his van Evie, and has never looked back! After 6 months of decking it out, he and his dog can now easily live off grid for 4 or 5 days at a time.

Give us a bit of support so we can keep bringing you great content by subscribing in Youtube. Thanks 😊

Do you want to be filmed?

We are always looking for Nomads to tell their story and show the world their home in wheel, so if you are a Nomads or know one please fill out the form here.

Say hello to Chris who’s lived in his immaculate

What do you think about this rustic van fitout? Ru

Hi Everyone!😊 We are Kevin, Marco and Cristina.

Join Nomads Around Australia as John and Evie give